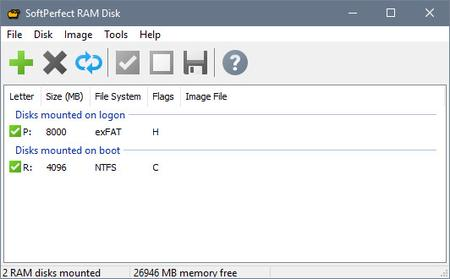 SoftPerfect RAM Disk is a high-performance RAM disk application that lets you have a disk on your computer entirely stored in its memory.

As the memory is much faster than physical hard disks, storing temporary data on a fast in-memory disk achieves a higher performance. Whatever your job is, read on to find out what a RAM disk can offer you.
SoftPerfect RAM Disk creates a virtual disk residing in the computer RAM accessible in Windows Explorer and other applications, allowing you to store any temporary information on this disk. Furthermore, Windows can be configured to use the RAM disk for temporary files, so that the system and most applications would use the fast in-memory disk for their temporary data. As Windows and other third-party applications often create a large number of temporary files for a short only, using a RAM disk will extend your hard disk’s life by sparing it from excessive reading and writing.
Modern computers are equipped with at least 4 GB of RAM, and most of the there is a lot of unused memory that could be used as a high-performance alternative to the slower HDD storage. This product lets you create any number of virtual RAM disks limited only by the memory available. You can also work with on-disk images and RAM disks associated with an on-disk file, that ensures your data is preserved between sessions.
While regular users will benefit from moving web-browser caches and Windows temporary files to a RAM disk, IT professionals may find even more advantages. For example, programmers can speed-up the development process by redirecting intermediate compiler output to a RAM disk, database administrators can improve performance by using a RAM drive for things like tempdb, and so on.
Key features of the RAM Disk:
Any number of RAM disks. In practice, up to 26 disks due to the number of drive letters available.
Any RAM disk size on 64-bit systems. Up to approximately 3.5 GB on 32-bit systems.
Persistent RAM disks with an associated on-disk image.
Volatile RAM disks whose content disappears on shutdown.
Built-in disk image manipulation tools.
Five very good reasons to use the RAM Disk:
Higher computer performance. Provided you have a sufficient amount of RAM, using a fast in-memory disk for temporary data will boost the computer performance.
Reduced wear-and-tear of the physical disk. Because temporarily files are not written to the hard disk, there will be fewer read/write cycles, which is especially important for prolog the life of Solid State Drives (SSD) commonly installed in laptops.
Less junk on the hard disk. Many software applications create temporary files that remain undeleted although no longer needed. The contents of RAM disks is cleared every the computer is restarted or switched off, so the unneeded files won’t clutter your hard drive.
Reduced file system fragmentation. The file system on your hard disk will be far less fragmented as the temporary files will never be written to the hard disk.
Less noise and heat from the hard disk because the system will use the hard disk less intensively.
Windows 7 through Windows 11, Windows Server 2008 R2 through 2022
–