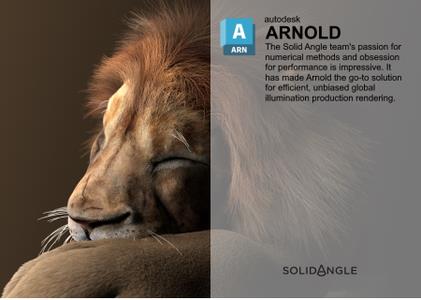 The software developer Solid Angle is pleased to announce the availability of Arnold (or MtoA) 5.2.0 for Autodesk Maya. This update introduces Arnold 7.1.3.0 and is a minor feature release bringing improvements to volume shading and viewport rendering.

–Viewport rendering improvements:A new toolbar has been added to all model view panels to make it easier to run and control the Arnold Viewport Renderer. The new crop render tool allows users to select a crop region without needing to render a full viewport first (MTOA-1006) 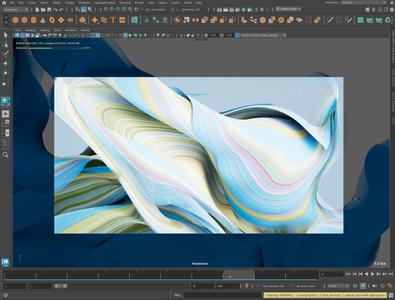 –Arnold Render View by Default:The Maya Render View has been replaced with the Arnold Render View for Arnold Renders and IPR, except for Render Sequence (MTOA-1008)
–Emit Specular & Emit Diffuse Options on Maya Lights:This version adds support for the native Emit Specular and Emit Diffuse options on Maya lights (MTOA-1086)
–Dual-lobe phase function for standard_volume:A new phase function model has been implemented for the standard_volume shader, which is a mixture of two lobes rather than a single lobe as before. This provides a more realistic approximation to the physical phase function of scattering media such as clouds. The new model adds two new parameters, scatter_secondary_anisotropy (in [-1,1]) and scatter_secondary_anisotropy_mix (in [0,1]). (ARNOLD-9335).

The image below shows the full parameter space of the new dual-phase function model (each cell shows the phase function shape for a given combination of lobe anisotropies, which varies as the lobe mix weight is animated). The blue curves correspond to the old single lobe model. 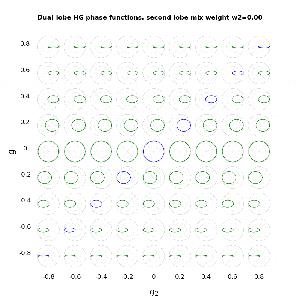 –Physically correct volume emission scaling:The standard_volume shader has been improved to support scaling of volumetric emission in a more physically correct manner (via the emission_scaling option). The “opacity” emission scaling mode is based on density and transparency and scaled appropriately to the opacity of the resulting volume. This is physically accurate for blackbody if the scattering color is black. The “thermodynamic” emission scaling mode is the most physically correct as it also takes into account scattering color, since according to thermodynamics volumes with higher scattering albedo emit less blackbody radiation. For example, burning hydrogen produces steam but barely emits blackbody radiation while sooty smoke readily does. This mode is most useful when mixing different types of volumes with varying scattering properties. (ARNOLD-11701).

The images below show the effect of the scaling mode on blackbody emission. The difference between opacity and thermodynamic modes here is that in thermodynamic mode the white, highly scattering smoke does not emit, while the black smoke does (which is a slightly subtle effect but more physically correct). 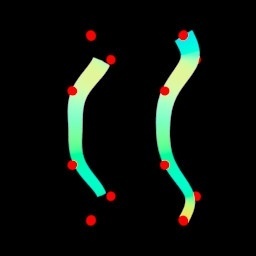 –Nested instancers:Nested instancers (instancer that contains instances of instancers) now properly perform instancing, fixing a severe overhead in node init/update time that made heavy use of nested instancers intractable. (ARNOLD-12410)
–Cameras in ASS procedurals:Cameras stored in .ass file procedurals can now be used for rendering. (ARNOLD-12333)
–Cryptomatte 1.2.0:The version of Cryptomatte bundled with Arnold is upgraded to 1.2.0 (ARNOLD-12340).
–Upgrade OpenImageIO 2.4.1:The OIIO used by Arnold has been upgraded to slightly newer than 2.4.1 (OIIO hash 7a662829b). (ARNOLD-12471)
–Reduced missing texture overhead:The time spent handling missing textures has been reduced. Most likely this will be noticeable on file servers servicing a render farm. (ARNOLD-11915)
–Light profile blocks:The AiLightsPrepare() profile result has been elaborated on, with LightSampling, light_filters, and LightInitSampler profile blocks being added. This will result in the self times reported for AiLightsPrepare() going down and these other profile blocks showing up with the corresponding times. This can help point out where render time is going during lighting. (ARNOLD-12439)
–Python binding error message:When Arnold cannot be loaded by the python bindings, we now output the original exception error message instead of just the cryptic “Could not find libai”. (ARNOLD-12366)

–Support dataWindowNDC:when the render settings primitive defines the attribute dataWindowNDC, it now renders accordingly in both Hydra and the USD reader, by framing the render to the expected normalized window. usd#1161
–Cryptomatte in Hydra:When rendering final frames with Hydra, the cryptomatte metadatas are set in the output image usd#1164
–Render products with no productName:When AOVs are defined through a render product prim that doesn’t have any product name, they now render to the same filename as the beauty image. usd#1170
–Instances optimizations in the procedural:When using instances, the usd procedural now relies on a usdStageCache to represent the instance prototypes, instead of re-loading the usd files on disk for each prototype.
–Pinned curves:Curves pinning is now supported in hydra and in the procedural

–Unique identifiers for AtUniverse:Each universe has a unique ID that can be obtained through the new AiUniverseGetId() API. This ID can later be used to retrieve a pointer to that universe using the new AiUniverseGetFromId() API. (ARNOLD-12302)
–Print system info:The new AiMsgSystemInfo() outputs information related to the Arnold version, the system, and the devices. Even though this information was already printed at the start of an Arnold log, in certain cases it is useful to reprint it. (ARNOLD-12428)
–AI_LOG_STATUS mask:We introduced a new log mask called AI_LOG_STATUS for messages that Arnold generates to indicate what is currently occurring. For instance, it will report when GPU shader compilation is occurring, when rendering has started, when node init and update are starting, and so on. These messages can help plugins to explain to users what is going on and what, for example, Arnold is doing before rendering starts and the screen is still black. (ARNOLD-12219, ARNOLD-12502)

–Post translation scripts are now Python-based:A constant variable UNIVERSE_ID is set that can be used to retrieve the current render universe and change nodes after translation (MTOA-966).

For example a user could set the translation script like so: 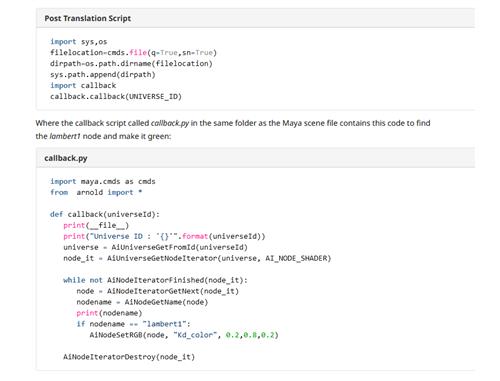 –Emit Specular & Emit Diffuse Options on Maya Lights:The added support for the emitSpecular and emitDiffuse attributes on Maya lights will affect the look of scenes that have these checkboxes enabled. Disabling those options will revert back to the previous look. (MTOA-1086)
–Improved AOV wildcards:When using AOV wildcard syntax and specifying a name for an output layer, the AOV type will be replaced by the given name. For example, using a wildcard of ‘diffuse_*’, a layer name of ‘myLayer’, and AOVs of ‘red’ & ‘blue’, the layers written into the EXR will be named ‘myLayer_red’ and ‘myLayer_blue’ instead of the default ‘diffuse_red’ and ‘diffuse_blue’. (ARNOLD-12282)

Arnoldis an advanced cross-platform rendering library, or API, used by a number of prominent organizations in film, television, and animation, including Sony Pictures Imageworks. It was developed as a photo-realistic, physically-based ray tracing alternative to traditional scanline based rendering software for CG animation.

The Arnold architecture was designed to easily adapt to existing pipelines. It is built on top of a pluggable node system; users can extend and customize the system by writing new shaders, cameras, filters, and output driver nodes, as well as procedural geometry, custom ray types and user-defined geometric data. The primary goal of the Arnold architecture is to provide a complete solution as a primary renderer for animation and visual effects.

Arnold for Mayais an advanced Monte Carlo ray tracing renderer built for the demands of feature-length animation and visual effects. It uses the Open Shading Language to define the materials and textures. Arnold for Maya (or MtoA) provides a bridge to the Arnold renderer from within Maya’s standard interface.

Solid Angleis leading provider of rendering software for animation and visual effects. The Arnold team believe that accurately and efficiently computing light transport in CG scenes is the best way to create stunning imagery for films and TV. Developers strive to provide clients with the best rendering tools to efficiently create realistic images.

Solid Angle is a wholly owned subsidiary of Autodesk Inc, and has its offices in Madrid and London. 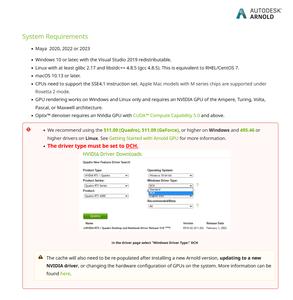 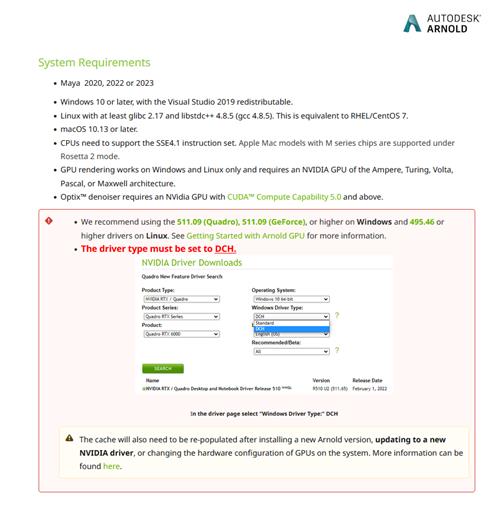