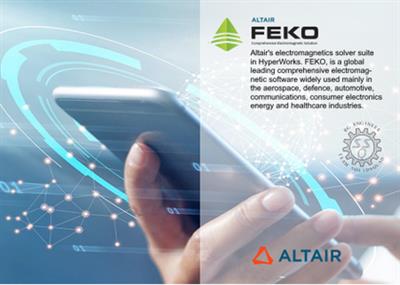 The software developer Altair is pleased to announce the availability of Feko 2022.0.1 is available with new features, corrections and improvements. This version (2022.0.1) is a patch release that should be applied to an existing 2022 installation.
Feko 2022.0.1 Release Notes

The most notable extensions and improvements to Feko are listed by component.

CADFEKO
Resolved Issues
– Made improvements to volume meshing performance after changes introduced in Feko 2021.2.2 may have caused volume meshing to be slower.
– Resolved an issue with CEM validate incorrectly reporting an error for models containing SEP regions and finite arrays to be solved with the domain Green’s function method (DGFM). This combination is supported.
– Resolved an issue with the visualisation of connector pins in the cable harness schematic view in Feko 2022.
– Resolved an issue that may have prevented reading solutions from an existing .str file for models containing circular waveguide ports. This could have caused unintended re-calculation of solutions rather than using existing solutions. For models that suffered from this behaviour, the .str will need to be created once using this version of Feko. The behaviour in subsequent simulations should be as expected. This change will affect the precision of values used in waveguide port point definitions generally.
– Resolved an issue where the properties of a cable shield could not be set through the API if the cable shield previously referenced a medium that no longer exists in the model.
– Resolved an issue where the outer radius of a cable bundle was required to be much larger than the minimum Total shield radius value displayed on the Advanced tab of the Cable shield dialog of the cable shield applied to the bundle.
– Resolved an issue with the number of frequency points written out by the Parameter Sweep: Create Models application macro. This could have triggered a Number of frequency points mismatch error when using the Parameter Sweep: Combine Results application macro in POSTFEKO.
– Resolved the issue that only complex impedance loads could be added to transmission line ports. All load types, for example series or parallel circuits, can now be applied to transmission line ports.
– Resolved an assertion failing with the message Assertion failed: getLayer() when working with network schematics. After deleting network schematic elements in a certain order, the assertion failure could be encountered in various ways, including further modifications to the model, re-opening the model after saving it, or when importing another .cfx model
POSTFEKO
Resolved Issue
– Resolved an issue with Cartesian graphs where the graph axes were not updated correctly when the axis unit changed due to changes made to the graph. Showing or hiding a trace with a different range from the Descriptionted traces may have seemed to cause traces to disappear from the graph until zooming to extents or re-applying the Axis settings.
Solver
Feature
– Improved the robustness of creeping ray path computations near transition regions of faceted UTD models.
Resolved Issues
– Improved the accuracy of receiver power calculations in coupled MoM/RL-GO or MoM/faceted UTD simulations.
– Improved the efficiency of the Huygens source processing phase of an RL-GO solution, resulting a speed-up of up to 35% for in some cases.
– Corrected an error that may have reaulted in inaccurate calculation of power when using the receiving antennas with faceted UTD solver.
– Resolved an issue that may have resulted in unexpected termination of the solution or inaccurate results when using the ACA solver with plane wave source/s looped over multiple directions.
– Resolved an internal error that occurred during the calculation of interpolation tables of a model with a planar multi-layer substrate and wire ports.
– Resolved an issue where results for angles of incidence in a loop of multiple plane waves that were already completed may not have correctly been loaded and shown in POSTFEKO if the user terminates the simulation.
– Optimize the calculation phase of the spherical mode receive antenna.
– Cable analysis problems solved using the MTL method using will not incorrectly trigger error 55007. This resolves an error introduced in Feko 2022.
– Resolved a regression in Feko 2022 that resulted in longer runtimes than expected when re-using solution coefficients from a .str file with the MLFMM solver.
– Resolved an issue that may have caused rapid non-physical variations in the reflection coefficient phase when solving some periodic structures using periodic boundary conditions.
– Resolved an issue that resulted in multiple .ffe files, each containing a single direction, being written out for monostatic RCS requests in a recent release. A single .ffe file containing results from all directions is now written to disk.
– The test to determine when grating lobes may impact on results for simulations using oblique PBC unit cells has been refined so that a warning about potential inaccuracies is only given when relevant.
– An MPI error that occurred in some combinations of parallel processes stating that message sizes do not match across processes is now avoided.
Shared Interface Changes
Resolved Issue
– Resolved an issue where In-App Licensing was used instead of HPC Licensing when the Solver was started from a Feko Terminal opened from within a Feko graphical user interface (GUI) application. HPC Licensing should apply where a solver is not started from inside a graphical user interface application and a SolverHPC license feature is present. Feko Terminals opened from the Launcher utility was not affected by this issue.
Support Components
Feature
– The automatic mesh refinement script has been extended to cater for simulation models that include referenced files.
Resolved Issues
– Resolved an issue where opening the Feko help from the Launcher utility invoked two instances of the help in the web browser.
– Resolved an issue that may have caused a memory violation when a large number (> 500) samples were required in ADAPTFEKO.
– Added consistency checks and a more verbose error message when importing near field files as equivalent sources or receiving antennas.
– Resolved the issue that the Feko help could not be opened from the Launcher utility in server installations.
WinProp 2022.0.1 Release Notes
The most notable extensions and improvements to WinProp are listed by component.

ProMan
Feature
– Extended MIMO network planning from 4 to 8 streams.
Resolved Issues
– Fixed an incorrect reading of the phase information from antenna patterns given in .ffe files.
– Network planning results are now displayed for all time steps in a project with a moving transmitter.
– Rays can now be displayed in all relevant layers of CNP projects.
– Disabled condition number computations, during mobile station post-processing, of a SISO project.
– Resolved a regression introduced in a previous version that resulted in the incorrect computation of the transmission matrix entries of the horizontal polarization.
– Accelerated the 2D display of large urban projects.
– For a prediction point that moves with an object in a time-variant simulation, the rotation of the mobile antenna pattern with the object, if any, will now also be considered during RunMS.
– Resolved a crash that could occur during RunMS computation with Doppler Spread requested.
– Improved the handling of diffraction considerations around walls near sub-divisions, resulting in enhanced accuracy of SBR calculations.
– Resolved a crash that may occur during network planning, with EMC analysis, in a project without an associated .emc file.
– Resolved an issue that resulted in non-existent lines being displayed in 2D view in ProMan for some large databases.
– Disabled data export along a polyline for trajectory and point-mode results.
– Result-Description legends defined on processed results, such as after an arithmetic operation, are discarded when unprocessed data are displayed afterward, to avoid using a scale that is not appropriate. This was previously not the case.
– Negative prediction heights with respect to sea level can now be specified in case topography includes such low-lying land.
WallMan
Resolved Issues
– It is now possible to split various formats of large topographical maps into tiles upon conversion into the WinProp binary format. The converted tiles can then be more efficiently loaded and viewed in ProMan via the generated .tdi index file.
– Improved the detection of whether the user specified an incorrect coordinate system for topography and clutter map conversions.
– Resolved an issue that resulted an incorrect clutter shape when defining clutter, based on a polygon, in an urban database.
– Resolved an issue related to the orientation of topographical maps, after conversion from the digital terrain elevation format into the WinProp binary format.
– Resolved an issue that resulted an incorrect clutter shape when defining clutter, based on a polygon, in an urban database.
Application Programming Interface
Features
– Enabled Doppler shift results and PropSim channel output for projects with trajectories simulated with WinPropCLI.
– Added support for Components to the API.
Resolved Issues
– Resolved a bug that resulted in “NaN” being written out for some points in ASCII result files of some trajectory-mode projects.
– Resolved an issue that leads to different RunMS results between WinPropCLI and ProMan when the maximum number of rays is much higher than the default value.
– Resolved an infinite loop condition that may occur during predictions with the SRT using the API on Linux.
newFASANT 2022.0.1 Release Notes
The most notable extensions and improvements to newFASANT are listed by component.

General
Resolved Issues
– Various improvements to have been made to the CBFM when applied to non-RCS simulations to resolve issues noted in the Feko 2022 release of this capability.
GUI
Resolved Issues
– Fixed an error that resulted in the incorrect orientation of the multipole antenna in the GTD module for some cases.
– Rendering errors with ray tracing visualisation option in the US (Ultra Sound) module have been fixed.
– An error which caused an error in the Java runtime environment when closing the application on some Linux systems has been resolved.
– Corrected a backwards compatibility problem that may have occurred when opening old models with imported field sources. Various changes were also made in order to improve visualisation performance.
Solver
Features
– A new material definition method, based on reflection and transmission coefficients has been added for the MoM module. This material definition method can be used to get more accurate results when modelling radomes that include FSS structures, after characterising the FSS unit-cell using the periodic structure module.
– Added support for multiple active sources when the coupling is requested in the US module.
Resolved Issue
– Improved the meshing speed on Windows operating systems. 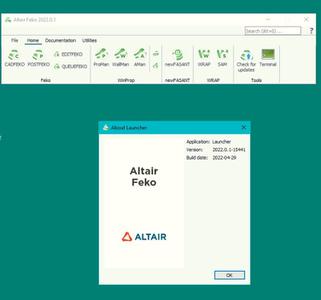 
Buy Premium From My Links To Get Resumable Support,Max Speed & Support Me